Living in Montreal is easy if you wish French to be the language of instruction.

For schools with lessons taught in English, you may have to look harder.

Quebec’s education system differs from Canada’s other provinces and territories.

Getting an Education in English

Children attending public primary schools in Quebec must attend French school unless they are temporary residents of Quebec, members of Canada’s First Nations, or have attended a Canadian school in English.

Children of parents who themselves attended an English school in Canada are also eligible to study in English.

Children who immigrate to Quebec are often compelled to attend school in French, regardless of their parent’s native language.

For those immigrating to Quebec, one method of having your children attend school in English is to send them to an English private school for their first year of education.

When it comes time to register your child for their second year of school you can apply to public English school as the majority of the child’s Canadian education has been in English.

This is part of the reason Quebec has the highest percentage of children attending private schools. A private education is not reserved for the rich.

Many middle and lower class parents work night jobs and save extra income for the expense. Quebec’s government also offers a range of bursaries and grants to families sending their children to a recognized private school.

The criteria for attending English public schools in Quebec are subject to constant change (usually tightening). Be sure to check the latest requirements with the English School Boards Association before making any decisions.

The largest English school board in Montreal is the Lester B. Pearson School Board. It is made up of 62 elementary and secondary schools, all located just outside of the city center like Beaconsfield, Dollard-des-Omeaux and Kirkland.

It is one of the best funded school boards in the country because of its innovative use of technology and progressive teaching methods.

Quebec also provides funds for one year of French classes for non-French speaking adults applying to become permanent residents of the province. 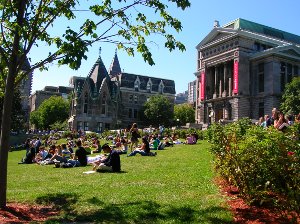 Montreal has the highest concentration of post-secondary students in North America. There are nearly 4.5 students for every hundred residents.

Within an 8 kilometre radius, there are:

The best known university in Montreal is McGill University. McGill consistently ranks in Canada’s top three and the world’s top 100 universities. It is one of Canada’s oldest schools, and known worldwide. English is the language of instruction at McGill.

Concordia University is Montreal’s next largest and offers a range of Masters and Doctoral programs, with English as the primary language of instruction in most.

Any cookies that may not be particularly necessary for the website to function and is used specifically to collect user personal data via analytics, ads, other embedded contents are termed as non-necessary cookies. It is mandatory to procure user consent prior to running these cookies on your website.